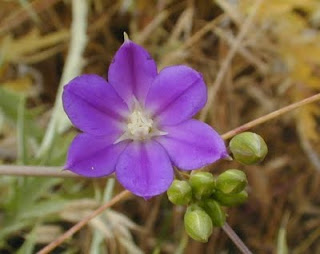 This lovely and rare brodiaea (Brodiaea filifolia) was afforded additional protection this week when the U.S. Fish and Wildlife Service expanded the acres designated as critical habitat for the endangered species. (This photo was taken by David Bramlet.) The flower only grows in isolated pockets of Los Angeles, Riverside, San Bernardino, Orange and San Diego Counties.

Under the Bush administration, the agency had registered less than 600 acres as critical habitat for the species. Nearly 3,800 acres will now be official labeled as "essential to the conservation of the species."

“We’re glad the thread-leaved brodiaea will get more protection than the Bush government proposed, but we’re worried that the new proposal still fails to include 33 of the 69 locations of this very rare lily,” said Ileene Anderson, a biologist with the Center for Biological Diversity. “Also, this proposal wants to remove protection for 16 more locations.”

According to the Center, the flower is threatened by a combination of urban development, off-road vehicles, grazing, and plowing for fire clearance and agricultural conversion.

The critical habitat designation doesn't fully protect the flowers (a corm). According the Stanford Environmental Law Society (in it's 2001 publication The Endangered Species Act), critical habitat designation can affect private land, "but only to the extent that a future activity on that land is subject to federal permitting." And only uses that "destroy or adversely modify" the habitat are restricted. (Hence, much ensuing debate over what constitutes an "adverse modification.")

The designation has the greatest effect on public lands, where federal agencies, such as the US Forest Service, usually take some additional steps to protect the species.

Anderson says since the plant was listed under the Endangered Species Act in 1998, entire populations have been extirpated, Anderson says. She adds the plant is still extremely vulnerable. “Anything but an expansion of final critical habitat is a recipe for extinction.”

The Center for Biological Diversity has petitioned the agency to overturn or revise Bush-era decisions affecting more than 50 species.