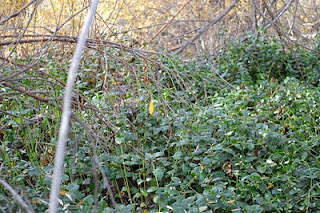 If you missed my five-part series on garden plants that threaten wildlands, check out the first three installments below (with links to the full story on the LA Times website).
GARDEN HANGOVERS PART 1
Ecologist Christy Brigham stands amid willows hemming Medea Creek in the Santa Monica Mountains. The trees’ amber leaves glow in the morning light. She frowns at an ivy-like plant with violet-blue flowers. It’s blanketing a large swath of the creek. “Periwinkle is a common landscape ground cover,” she says. “It’s attractive to some people. I think it’s a green menace.”
Periwinkle (Vinca major) hails from the Mediterranean. Let loose in parts of Southern California, it smothers virtually all of the wildlife-supporting native plants in its path. California is home to many indigenous plants found nowhere else on Earth. Many are at risk of extinction. The main culprit is urbanization, but weedy exotic plants — even some that residents buy for their gardens — often share the blame. Able to rough it in the wild, runaway plants can throw entire ecosystems out of balance.
Read the rest of the story. 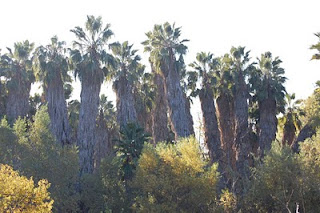 GARDEN HANGOVERS PART 2
When many of us think of Los Angeles, there’s a palm in the picture. That palm is likelyWashingtonia robusta, the Mexican fan palm.
Mexican fans are the remarkably tall (up to 100 feet), skinny palms with fan-shaped fronds that have towered over much of the city’s built environment for more than a century. More conspicuous than stars in L.A.’s washed-out night sky, some palm constellations have even been dubbed historic-cultural monuments.

Although other palms have sneaked into the scene, Nicholas Staddon, director of new plants for Monrovia Growers, says Mexican fans are still popular and “very valuable — it’s fast-growing and has a wonderful tropical look.” No primadonna, aptly named robusta thrives in a couple square feet of dirt amid a sea of concrete, even roots in sidewalk cracks.

But the region’s palmy past is seeding trouble. Click over to read the rest of my LA Times story. 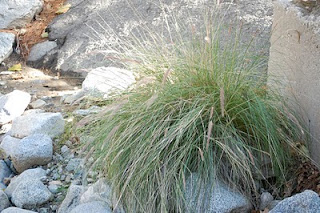 Part 3
Grasses are among California’s most prolific weeds. Exotic bromes and other annual grasses now carpet millions of acres, displacing of native wildflowers, bunch grasses and shrubs.
Most arrived with 19th century settlers and livestock (as contaminants in feed or lodged in animals’ coats, for example). But in recent years, ornamental grasses have joined the fray.

“Grasses are useful in a landscape,” says Jim Folsom, director of botanical gardens at the Huntington, “but by nature they are invasive; being a grass generally means being able to cover a lot territory fast.”
Read on.
Posted by Ilsa Setziol at 1:30 PM