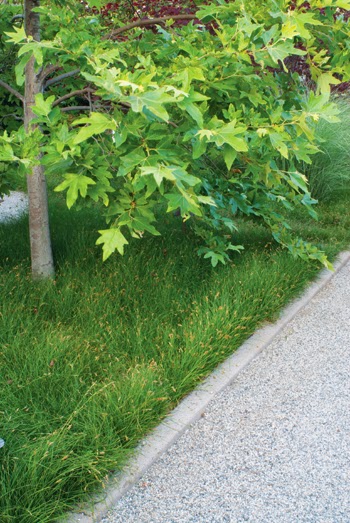 At long last, the lawn has become passé in Southern California, and it’s about time.

Lawns are perpetually thirsty and California is in the grip of a record drought. Many municipalities are paying residents to rip out conventional grass and replace it with drought-tolerant landscaping. (In Pasadena, the rebate is a dollar per square foot of turf, up to $2,500.)

Still, even scoundrels have redeeming qualities and lawns have theirs: providing a soft, durable play space that’s easy to incorporate into a garden. “When you have grass, artistically it ends up being a fairly simple design,” says Laramee Haynes of Pasadena-based Haynes Landscape Design. A strong design becomes more vital in the absence of grass, he says, because the assemblage of plants replacing it can look “too busy.”

Despite the challenges, losing one’s lawn presents opportunities. Many lawn-liberated gardens in the San Gabriel Valley are exemplars.

The story continues on the Arroyo Monthly website.
Posted by Ilsa Setziol at 11:20 AM No comments: 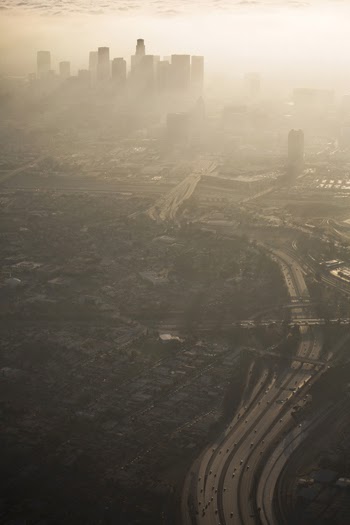 After years of progress, is Southland air still making us sick?


If you’ve lived in the Pasadena area long enough, you remember those summers when you couldn’t see the San Gabriel Mountains for days on end. From those mountains, you’d look out on a brown pall of pollution shrouding the L.A. basin.

The skies are clearer and cleaner now: The number of unhealthy air days in Southern California has been cut in half since 1976. And there hasn’t been a smog alert in over a decade. “We have done miraculous things through cleaner cars, better fuels, cracking down on refineries,” says Joe Lyou, who heads the nonprofit Coalition for Clean Air. The progress comes despite the region’s topography and growing population, both conducive to smog.

But — cough, cough — many of us are still breathing bad air, and changing that will require even greater efforts to clean up the way we live, commute and do business in Southern California. The metropolitan L.A./Riverside/San Bernardino area continues to have the nation’s most severe air pollution problem (tied with the San Joaquin Valley). In 2012, the region exceeded federal health standards for ozone on 111 days. The state estimates that, every year, Southland smog — primarily ozone and particulates — causes 5,000 people to die prematurely, shortening some lives by as much as a decade. The monetary cost in lost lives, hospitalizations, lost workdays, etc., is estimated at a hefty $14.6 billion. Part of our predicament is that the more public health officials study air pollution, the more health impacts they find, often at lower levels of exposure. “So the standards have gotten tougher over time,” says Lyou, also Governor Brown’s appointee to the board of the South Coast Air Quality Management District (AQMD), a local regulatory agency. “The goalposts have been moved.”

Read the rest of the story here.
Posted by Ilsa Setziol at 11:10 AM No comments:

Programmed to be Fat? 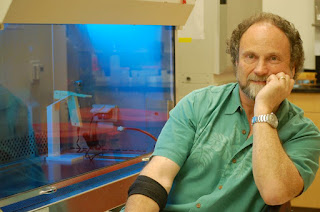 Obesity is at epidemic proportions in this country.

The conventional theory goes that people become obese because they take in more calories than they burn off. But molecular biologist Bruce Blumberg says it’s more complicated than that.

"If it were a simple problem, a matter of balancing our caloric checkbook, no one would be fat," says Blumberg. "We are not a country full of lazy people who just eat everything in sight."

In his lab at UC Irvine, some of his mice are obese. Blumberg made them that way, but not by overfeeding them.
"My mice become fatter on a normal diet," Blumberg explains. "That’s only because they were exposed to this chemical in the womb."

Listen to my story for Southern California Public Radio.

Posted by Ilsa Setziol at 4:26 PM No comments: