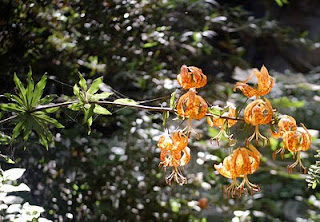 This Summer I was fortunate to take a hike with Mickey Long, who supervises natural areas for LA County Parks and Recreation. I asked him to join me at one of the more depressing spots in the Angeles Forest front country--the trail from Chantry Flat to Stuartevant Falls.
Although we spotted a number of wildflowers along the fire road descending into Big Santa Anita Canyon--including indian pinks and native delphinium (both pictured below)--we sampled a Smorgasbord of weeds: annual grasses, Spanish broom, euphorbia, arundo, bladder senna, eucalyptus, even rock roses. "Aesthetically there's something missing from the landscape," said Long, "both in form and function. The danger here is, 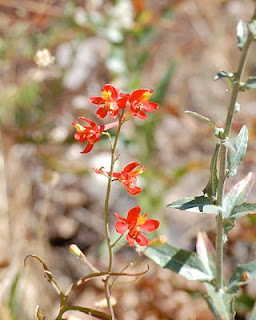 even though we're seeing plenty of native plant habitat, if a fire comes through, the weeds will get the upper hand."
Long pointed out Western Fence and whiptail lizards, hunting for bugs in the underbrush. He said the non-native grasses don't support the variety of insects that the native plants do.
Things didn't get any more cheerful when we arrived at the stream. 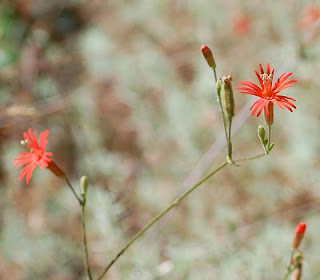 English ivy blankets 3.5 miles of stream bank.
Cabin owners planted the ivy decades ago and it's run amok. To keep the alders alive, they clip it off of the trunks. But the ivy (with a little help from some Himalayan blackberry) has crowded out most of the native plants. On a subsequent trip I counted only three Humboldt lilies (pictured up top) persisting along the stream.
Long said no one has studied the effect of the ivy infestation on native animals, but "there's not too many ways this could be beneficial to a native animal." Amphibians need to be able to move from the stream where they breed and to the adjacent hillside where they burrow. "They need to feed as they move around, and I don't know what food sources are left under there."
You can learn more about garden plants that threaten wildlands in these stories I reported for KPCC-FM.
Posted by Ilsa Setziol at 8:00 AM No comments:

Late Fall In Our Garden 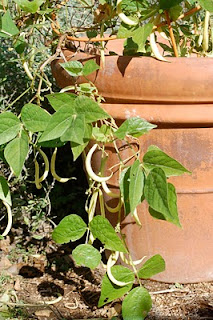 Most of our summer edibles are gone. But one wax bean plant is still producing a profusion of shiny little beans. I assume they're tasty, but can't really say. My three-year-old has claimed them as exclusively his.
It's a great strategy for getting kids to eat veggies. We steam up a batch of mostly store-bought green beans, topped with our homegrown yellow ones. My husband and I look longingly at the wax beans, but our son hordes them all.
Another great kid veg: potatoes. Need I say it? They're fun to dig up. We've planted the remains of our last year's yukon golds and they're thriving. We stored the seed potatoes in a wine fridge over the summer. It's a small, 8-bottle cellar, so there was something of a Sophie's Choice going on all summer--more potatoes, less wine.
A lot of our last fall's seed was still viable this fall. Indeed, some of the lettuce and spinach seed I'd left in the fridge (in a plastic bag), took off immediately. 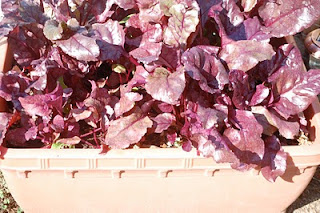 We're trying a new variety of beet this year. I bought some Bull's Blood from Baker Creek Heirloom Seeds. I'm already enjoying these gorgeous red greens in my salads.

Posted by Ilsa Setziol at 10:41 AM No comments:

Email ThisBlogThis!Share to TwitterShare to FacebookShare to Pinterest
Labels: Gardening

Roses: The Fruits of Neglect 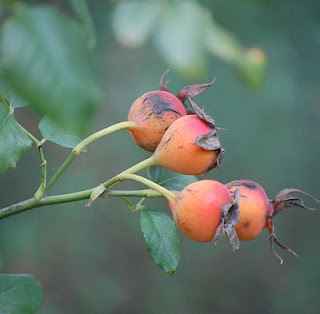 I've finally had some time to work my garden. After some reluctance, I pruned my unruly rose bushes.
Three of them top out over six feet tall, in part because I like them that way. They're surrounded by native sages and Mediterranean rock roses, and thrive on the same drip irrigation system and low-water regime. (I gave them supplemental water for the first couple years.)
I hadn't pruned the roses since last fall. As a result they were loaded with persimmony rose hips. I thought of it as my fall color, and the bushes looked far happier in the hot fall than had I tried to keep them blooming.
A few years ago Emily Green, who currently writes the LA Times Dry Garden column, wrote a brilliant piece about leaving roses alone. Check it out. It will make you long for the days when newspapers gave writers the space to write like this. Or at least some of them. Few write as well as Green.

Now, if only the weeds would pull themselves.
Posted by Ilsa Setziol at 3:21 PM No comments: