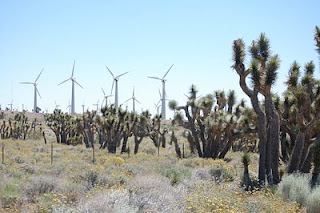 If you drive about half an hour north of Palmdale, you’ll find yourself in the foothills of Kern County ’s Tehachapi Mountains. They’re studded with Joshua trees, that sparse icon of the Mojave. But a new symbol is also rising, reaching its limbs into the desert sky.

Planted amidst the Joshuas: more than 3,000 wind turbines, resembling large white pinwheels. The older models are about six-stories-high. The newest are taller than the statue of liberty. Standing next to the turbines, Kern County planner Lorelei Oviatt says, “You’re actually in the middle of a 223,000 acre wind area that Kern County has set aside, where we hope we can site enough wind for over 3 million households.”

Read the rest of my story on KPCC.org

Posted by Ilsa Setziol at 2:48 PM No comments:

Email ThisBlogThis!Share to TwitterShare to FacebookShare to Pinterest
Labels: environment 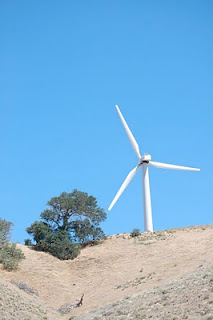 In reporting a forthcoming radio story on the rush of alternative energy projects in California’s Kern County, I spoke with V. John White, director of the Center for Energy Efficiency and Renewable Technologies.

The story takes listeners to the Tehachapi-Mojave Wind Resources Area, and airs tomorrow on KPCC-FM. Meantime, here’s a slice of my conversation with White.

A: We’re getting steadily better, I think. We spent a lot of time talking about doing renewables, but the fact is we’re still at roughly 15% renewable statewide.

That’s up a little bit from 12%. But we need to go much greater, to 20%-33% and beyond. That’s going to take significant effort, and I think we’re starting to get there. California had this big boom in the 80's and early 90's and then we stopped. And we learned a lot, but most of that experience went elsewhere and now we’re just getting back into it.

Q: How Does Kern County figure in this picture. I believe the California Energy Commission a few years back projected the county would provide about 40% of the energy needed to meet the Renewable Portfolio Standards (RPS)—the alternative energy mandates for investor-owned utilities.

A: They [Kern] have some of the best wind resources in the state that have yet to be developed--in the Tehachapi Mountains area. They also have, in parts of the county, very, very good solar resources. They also have proximity of transmission lines that bisect the wind and solar areas. So they have some very important advantages in terms of the resources they were blessed with.

They have some expertise from having built, operated and planned these resources, so they’re also becoming leaders and innovators in the planning of these project.

A: [County planners have] looked at where impacts might occur and added some requirements for the developers to protect species--it's a sign of some leadership. Also, in the solar area they have given a lot of thought to the best places.

A: It’s really a combination of things. In some cases it’s the transmission, interconnections, and in some cases there are federal wildlife reviews the state can’t do anything about. I think on balance CEQA [the California Environmental Quality Act] provides a means of identifying and reducing impacts from projects. CEQA is a burden for developers compared to other states, but as a result we get better projects with better mitigation and sometimes even less opposition because of the care and the time that is taken.

CEQA is a proxy for a conversation between project applicant and community. I think what you have in Kern County is a moderator for the conversation that can help [energy developments] be successful. By anticipating there are problems that have to be solved, instead of like in Texas trying to approve them as quickly as possible, you avoid adverse consequences and you learn as you go in ways that improve the projects….

A: I think that’s true. One of the problems with private land, however, is a lot of it is divide up into really small parcels. The [projects on] federal lands…it’s important they have an opportunity to get approved if they’re good projects. We have a great amount of economic stimulus money that we’re racing to try to capture by getting projects approved.

The thing about solar is you can still get a lot of energy from the land--with the right acreage--with very high solar radiation. [Public lands in] Kern County are in the Western Mojave, which has some of the best solar resources in the state and the whole country. And if projects are built there they can be smaller than comparable projects because of how good the radiation is. We have to recognize the scale of the energy we have to displace; the [vast] amount of energy we have to have to get off coal, fuel and electrical cars.

I think what’s happening now is the urgency of putting people back to work, as well as reducing greenhouse gas emissions and fossil fuel use, have combined to create a sense of urgency that’s causing all the local governments, developers, and environmentalists to raise their game.

American Energy companies are also look across the border for alternative energy. Listen to my story for The World.

Posted by Ilsa Setziol at 6:00 AM No comments:

Email ThisBlogThis!Share to TwitterShare to FacebookShare to Pinterest
Labels: environment 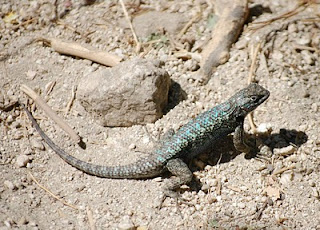 As much as I love lizards, I haven't taken the time to learn much about them. The common ones I've usually assumed to be fence lizards, and left it at that.
On a recent interview for a forthcoming radio story, I carelessly threw that label at this little reptile below. And was quickly corrected by biologist Mickey Long from the LA County Parks Department. It is, in fact, the California subspecies of slide-blotched lizard (Uta stansburiana elegans). 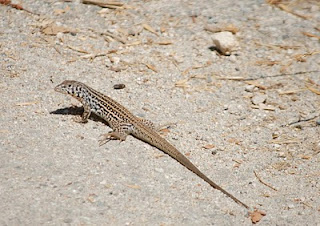 If you've got lizards in you garden, they're likely the San Diego Alligator Lizard (Elgaria multicarinata webbii).
Finally, if you like your lizards big, head out to the desert. I saw this Chuckwalla in Joshua Tree this spring. (Definitely not a fence lizard!) 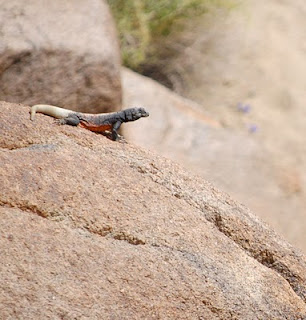 Posted by Ilsa Setziol at 10:30 AM No comments:

Email ThisBlogThis!Share to TwitterShare to FacebookShare to Pinterest
Labels: critters 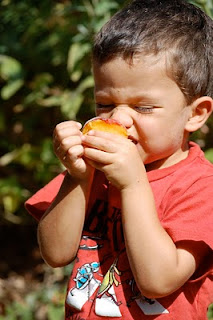 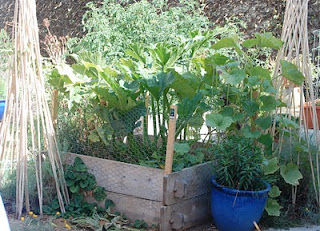 We're a little challenged aesthetically this year as we had to defend our food from digging skunks and at least one very healthy rat (all those blueberries he ate, no doubt).
In the bed above, Italian trombone squash (Zucchetta Rampicante Trombocino) is climbing a tomato cage and heading for a trellis. My aunt calls these "rumpa trumpas" and the name has stuck.
We also love the Romanesco zucchini we planted next to it. My 3-year-old enjoys the star shapes it makes when sliced.
Most of our seed this year came from Baker Creek Heirloom Seeds and Renee's Garden Seeds. 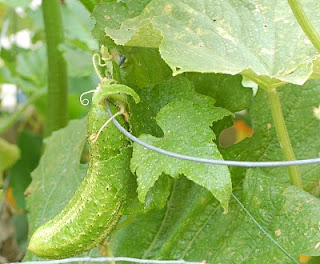 The heirloom De Bourbonne cucumber is thriving. And the sungold tomatoes are producing, despite the unseasonably cool weather.
Renee's "French Gold" beans are delish! 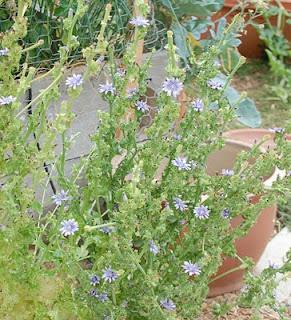 I've let some of my spring lettuce flower and the one above produced a lovely surprise.
Posted by Ilsa Setziol at 10:23 AM No comments:

Email ThisBlogThis!Share to TwitterShare to FacebookShare to Pinterest
Labels: Gardening

AFTER THE FIRE: ANGELES FOREST 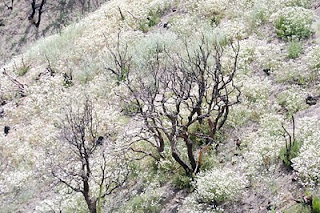 Southern California's chaparral is adapted to fire--or at least to natural cycles of fire. The progression of growth in an ecosystem is called succession. After a fire, with shrubs temporarily knocked back and more sunlight reaching the ground, annual wildflowers proliferate.
Indeed, several species are rare until a fire blows through and cues the seeds to germinate abundantly. I wrote about these fire-following flowers earlier this year for Chance of Rain. I hope you'll read the story.
I've been itching to see some fire-followers and other wildflowers, and check out how the Angeles Forest is regenerating in the wake of the Station Fire. So a couple weeks ago, I coaxed my 3-year-old into the car for a drive in the Angeles. Here's a slide show of what we saw, just from the road.
Thanks to Cliff McLean of the California Native Plant Society, San Gabriel Mountains Chapter for helping me identify the plants. I recommend his CD Field Guide, Common Plants of Eaton Canyon and The San Gabriel Foothills.
The flowers were beautiful, but I was troubled by some things I saw. First, despite many signs instructing people not to leave the road, people are hiking into the burn areas. Please know that if you do, you can tramp weed seeds from roadsides into not-yet infested areas.
The forest is especially vulnerable to weed colonization after a disturbance such as a fire. Weeds are no small matter; they can increase fire cycles to the point native plants can't recover. (Learn more about how human-caused fires threaten Southland ecosystems in my magazine story Sparking The Fires.)
You can see in a couple of the slides above that many weeds grow faster than native shrubs, allowing them to outcompete native plants.
The western stretch of Angeles Crest Highway (the La Canada entrance) is closed. You can access the Angeles through Big Tujunga Canyon, but the forest is closed to use, so stay on the road or face a $5,000 fine.
Click here for a larger version of the slideshow.
And check out this fun video about ecological succession:
Posted by Ilsa Setziol at 10:54 AM No comments: