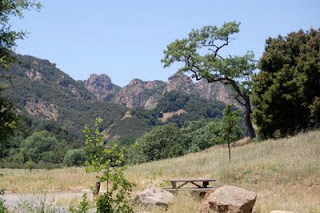 Because of a 25 percent cut to its budget, California's Department of Parks and Recreation is planning to close one quarter of all state parks by next summer. While this has upset park advocates, the state parks system faces another serious issue: The parks that will remain open are in need of maintenance.

One of them is Malibu Creek State Park. Its beautiful red peaks, willow-lined streams and oak woodlands have appeared in scores of movies and TV shows, including Butch Cassidy and the Sundance Kid and MASH.

But under the sunny spotlight of a recent 90-degree day, a close-up reveals the starlet’s beauty is fading.

Listen to this story on KPCC.org. 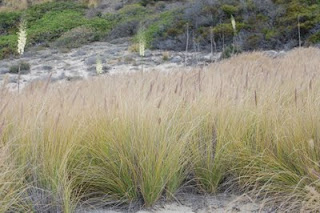 On a misty summer morning, ecologist Christy Brigham sinks down to the sand at Point Mugu State Park, part of the patchwork of federal, state and private lands in Los Angeles County's Santa Monica Mountains. She watches a darkling beetle forage among rare dune plants -- lacy, lavender sand verbenas and beach primroses, which resemble large buttercups. When Brigham came to this area eight years ago to work for the National Park Service, she thought she'd become an expert on plants like these, part of the region's unique Mediterranean-climate flora. But instead, she's spent most of her time dealing with common plants, many of them fugitives from local gardens and nurseries. Continue reading on the High Country News website.
Posted by Ilsa Setziol at 10:29 AM No comments: 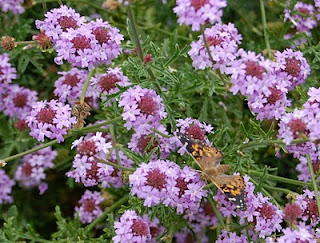 When Barbara Eisenstein and her husband, Jim, moved into their South Pasadena home a dozen years ago, it was like many in the neighborhood: an architecturally significant home — a 1910 craftsman — surrounded by a fairly banal garden. The grounds were mostly lawn, albeit studded with mature trees. A few birds perched in the oak, but it wasn’t the miniature nature preserve that encircles their home today.
Over the years, the lawn lost ground and was supplanted by wildlife-supporting native shrubs, including ceanothus and sages, and herbaceous plants such as monkey flower, penstemons and yarrow. Today the garden pulses with vibrant colors, bird song and the slurping and munching of lizards, caterpillars, butterflies and other small dinner guests.
Read the rest of this piece on Arroyo Monthly's website.
AND check out the extensive sidebar (exclusive to the print edition and reproduced here) on how to attract these popular butterflies:

In addition to the giant swallowtail, two others frequent local gardens. Named for the tiger-like stripes on their yellow wings, Western Tiger Swallowtail (Papilio rutulus) will drink from a variety of plants commonly found at nurseries, including lantana and aster family plants such as zinnia. Eisenstein grows native seaside daisy (Erigeron glaucus) and a variety of sunflowers. These swallowtails deposit their eggs primarily on sycamore trees, but they also use poplars, cottonwood, willows and alders.

The anise swallowtail (Papilio zelicaon) is also abundant here, because exotic sweet fennel (Foeniculum vulgare) has become a roadside weed and wildland invader. Skip the fennel; attract it with native plants from the carrot family.

Despite the name, these small brown butterflies are uncommonly lovely. Their wings are adorned with large eye-like spots in a kaleidoscope of blues, yellows, pinks, orange and black. “One of the reasons buckeyes are still relatively common in Southern California is because their caterpillars eat members of the snapdragon family,” says Karner. He adds, don’t panic if your snapdragons get chewed up. The plants will rebound—perhaps growing even more vigorously—and know that “you’re going to get some nice butterflies out of the deal.” Eisenstein’s garden features another buckeye host plant—native monkey flower (mimulus species).

Painted lady (Vanessa cardui) is sometimes called the cosmopolitan because it’s thought to be the most widespread butterfly globally. This small orange and black insect migrates into Southern California from Mexico in late winter/spring. It’s the one school kids rear in classrooms. Among the plants that host its young are lupines, mallows—even a vacant-lot plant called cheese weed--and thistles. Native and exotic mallows are easy to grow. Lupines provide a gorgeous blue accent in a native plant garden; they are nature’s complement to orange poppies.

This pretty pale yellow butterfly has become rare in recent years. It depends on native cassia and senna plants. The exotic ones found in conventional nurseries don’t do the trick, according to Karner. So ask your local nursery to order the natives, or visit the Theodore Payne Foundation in Sun Valley or Rancho Santa Ana Botanic Garden.

These charismatic orange and black butterflies only deposit their eggs on milkweed plants. The black, yellow and white-striped caterpillars nurse on the plants’ alkaloid sap, which makes them toxic to predators. Exotic milkweeds are readily available, but some research suggests they leave the butterflies more vulnerable to parasites than the natives do. A good source for milkweed seed is Butterfly Encounters.com.

When positioning milkweeds, keep in mind that some are not beauties, and the voracious caterpillars will defoliate them. It’s the butterflies that dazzle.

This pumpkin-colored butterfly, with black and silver accents, is native to Mexico and the Southeastern U.S. The grey caterpillars brandish horizontal orange stripes and black spines. The insect moved into coastal California when its host plants—passion vines—became popular in gardens. Avoid blue crown passion flower (Passiflora caerulea): it’s a weedy plant that can escape gardens and damage wildlands.

Posted by Ilsa Setziol at 10:42 AM No comments: 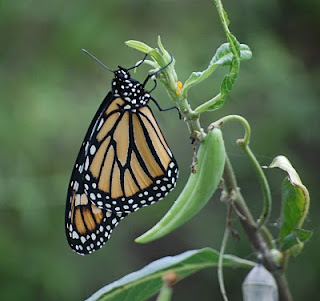 Meet Frank. He's a monarch butterfly that my son and I raised. We don't actually know the insect's gender, but that hardly matters to a four-year-old.
Butterfly gardener extraordinaire Connie Day gave us two caterpillars from her garden, which is a certified Monarch Waystation.
We reared them inside (mostly) on a milkweed plant, which provided all they required, except water drops. We placed the plant inside one of those netted cages you use to raise painted ladies.
Some articles I reported recently afforded me the opportunity to engage Brent "the bug guy" Karner of the LA County Natural History Museum in an extended conversation about butterflies. A portion of the discussion was broadcast last weekend on KPCC's Off-Ramp. Check it out.
Posted by Ilsa Setziol at 6:50 PM 2 comments: 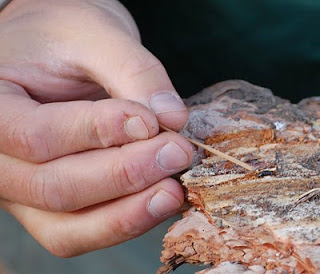 In the last decade, tiny forest-dwelling beetles have wiped out pine trees on millions of acres in the Canadian and American West, including Southern California. The rest of the state has been largely spared, but forest ecologists say that's likely to change.
Learn why in this piece I reported for KQED's Climate Watch.
Posted by Ilsa Setziol at 4:22 PM No comments: 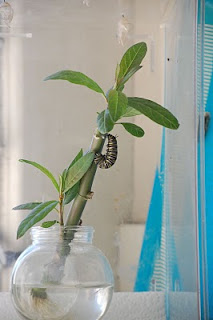 Dwindling monarch butterfly populations have prompted some gardeners to pepper their landscapes with milkweeds, the various plants in the Asclepiadaceae family on which monarchs lay their eggs. Chubby, zebra-striped monarch caterpillars gorge themselves on the plants' milky alkaloid sap, which makes them poisonous to birds.

The question for many isn't whether to grow milkweed, but how -- and which kind.

In Connie Day's Santa Monica garden, a tiger-colored monarch spars with another butterfly, chasing it from a patch of milkweeds.

"The challenge is keeping the food here," Day says, noting that a few monarchs can defoliate a plant in a couple of weeks.

Read the rest of this story in LA Times Home.

Posted by Ilsa Setziol at 4:52 PM No comments: