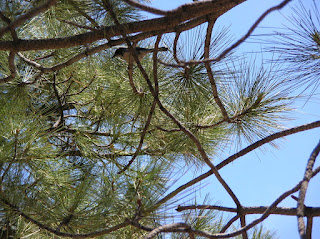 When thousands of trees toppled in last November’s fierce windstorm, it was a reminder that urban trees, those gentle giants, can pack a powerful punch. Pasadena and Altadena are still littered with stumps, uplifted sidewalks and orange cones. The event has prompted soul-searching among arborists and tree lovers over the challenges of sustaining urban forests.
The loss of so many mature trees — more than 1,500 in Pasadena alone --- isn’t just an aesthetic issue; it means hotter, more polluted neighborhoods for years to come. “Large trees, particularly conifers, are like giant air filters,” explains Rebecca Latta, a former Pasadena tree superintendent. “They intercept large particle pollution that can get into your lungs.”
It’s a calm January day, and Latta is surveying some of the damage in north Pasadena. She examines the slanting 8-foot-tall stump and exposed roots of a deodar cedar. A resident has wrapped the tree with green-and-white barricade tape reading “killer tree.” “The winds were coming from the north and pulled the root plate up,” says the consulting arborist and oak specialist based in Glendora. “You can see the roots came up a long way, so there had to be tremendous force placed on top of this very tall tree.” Indeed, wind speeds approached 100 miles an hour in the unusually destructive storm; meterologists considered it a ferocious variation on the gentler and warmer Santa Anas typical of the season.
Latta notes the winds especially “devastated the really tall trees — Canary Island pine, deodar cedar, stone pine.” Some trees probably toppled simply because of the velocity. But the demise of others can, at least partially, be attributed to the challenges of growing trees in parkways. “Street trees have to be maintained in a situation where they have limited root space,” says Latta. “And, in some cases, the trees will pull up the sidewalk, curb and gutter, so those trees will have their roots pruned when new sidewalks are put in.” That makes trees less stable.
Inadequate watering regimes also threaten both street trees and their brethren in home gardens. That’s because trees and lawns have fundamentally different water requirements, as horticulturist Barbara Eisenstein is quick to point out. “Watering once or twice a week for 10 minutes is not good for trees,” she says. “The water doesn’t soak down very far; trees want a much deeper root system and you want to water them infrequently and really deeply.”
The storm was so intense at Eisenstein’s South Pasadena home — small branches flying everywhere, windows blowing open, dust swirling around the house — that she worried her mature avocado and deodar cedar would crash onto the Craftsman home. They didn’t, perhaps because of the care she’d given her trees. Eisenstein had removed the lawn around both trees and replaced it with mulch, which allows for less frequent watering and prevents root rot. Another tip: Cap or remove irrigation systems around trees so they don’t spray the trunks. “There should be no watering [next to the tree],” says Latta, “If the soil is too wet or the soil is compacted you don’t have enough oxygen in the soil or the exchange of gasses that tree roots need to be healthy.”
Pasadena is hiring a consultant to undertake a storm post-mortem, analyzing how its street tree practices might be improved. The findings are expected to be released to the public in the spring. Meanwhile, Forestry Superintendent Kenneth Graham says, the city hands out care guidelines to residents when workers plant new street trees, advising, among other things, “not to grow any groundcover adjacent to tree trunks.” He notes that the city trims and inspects street trees every five to seven years, depending on the kind of tree. Latta says that for some trees, that’s not often enough.
And many trees, both municipal and residential, suffer from sloppy pruning. A lot of cities have cut their tree maintenance funds, and Eisenstein says they often contract with companies that charge less and aren’t as diligent. Pasadena, however, has increased its street tree budget in the last decade.
Perhaps the worst offender is Southern California Edison, which prunes — no, hacks --- trees near power lines, lopping off their tops in a bad buzz cut. “Trees should never be brought down, called ‘heading back’ or ‘topping,’” Eisenstein says. “As soon as you cut a branch in the middle like that, it sends out multiple shoots that aren’t attached to the stem very well.” The new shoots are weaker and the dense regrowth creates more wind resistance.
For homeowners, finding a good tree service can be a challenge. Latta says even she struggles to find qualified crews. She recommends making sure a certified arborist supervises any pruning and that the arborist doesn’t leave your job site until the crew is done cutting. It also helps to hire a consulting arborist who specializes in the tree species you have.
As Latta continues her tour, she points out more stumps in Altadena, then drives by a spot where trees blown over in a previous storm have not been replaced. Pasadena officials say they’re optimistic they can secure grants and other funds for replanting, although they acknowledge the city faces financial constraints. But Latta wonders aloud whether L.A. County will have the money to reforest Altadena. “All these cities --- Pasadena, Altadena, Arcadia, La Cañada --- have really amazing urban forests,” she muses. “I think the legacy we leave our children is to replant and to maintain the trees we have so we don’t lose them.” And even if the fallen are replaced, it will be decades before the saplings grow into the giants that stood before the storm.
Click through for Barbara Eisenstein's Tips on Planting and Caring for Trees
Posted by Ilsa Setziol at 12:04 PM 3 comments: