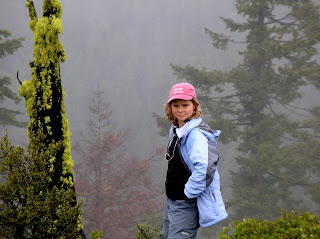 This is my personal blog, where I ramble on places I've been, issues related to my professional writing, and nature explorations I've undertaken with my son. It is not a paid gig; the prose is not polished.

I work as a freelance reporter for various public radio programs and stations, especially NPR-stations KQED and KPCC. For KQED, I serve as a correspondent for ClimateWatch. I also contribute to the Home section of the Los Angeles Times and other print media. You can find some work samples on my Journalism Archives page.

I've been an environment reporter for more than a decade, covering issues ranging from endangered species and the state's various ecosystems to air pollution and water. An interest in botany led me to take up horticultural writing in recent years. Previously, I was senior producer for Larry Mantle's AirTalk on KPCC.

I've been a fellow at the Woods Hole Marine Biological Laboratory, the University of Rhode Island's Metcalf Institute, and the Institute for Journalism and Natural Resources. I've also served as co-chair of awards for the Society of Environmental Journalists, and as a peer reviewer and panelist for the National Endowment for the Humanities.

My BA, from UCLA, is in World Arts and Cultures.